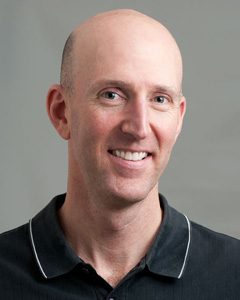 Mark first became interested in massage while on the Track and Field Team at Stanford University. After struggling with IT Band Syndrome for 8 months, he travelled to Gainesville Florida to be treated by legendary therapist Gerard Hartman. It took Gerard 10 days of orthopedic massage and stretching to get Mark running once again pain free. Mark went on to be an All-American, school record holder in the Distance Medley Relay and co-captain of the 1995-96 Stanford Track and Field Team.

Mark attained his massage certification in 1996 and immediately began training under Len DeBenedictus. After one year of working out of a condominium on California Ave in Palo Alto, they opened SMI in the summer of 1997. Mark has gone on to establish himself as one of the premier orthopedic massage therapists in the country. He has worked with numerous Olympic medalists, world record holders and professional athletes. He co-authored a book with Dr Michael Frederickson entitled “Foam Roller Techniques” which details using the foam roller for self massage and developed the PHLX Foam Roller System. He has been mentioned on numerous occasions in Runner’s World and Running Times as an injury prevention specialist and since 1999 has coached with the Leukemia and Lymphoma Society’s Team in Training (TnT). He continues to work closely with TnT, Asha for Education, the Stanford Athletic Department as well as numerous other clubs and organizations in the area. Mark enjoys running and reading in his free time and is passionate about cooking (and eating), and loves spending time with his wife Kendra and daughters Ella, Elise and Emilia.